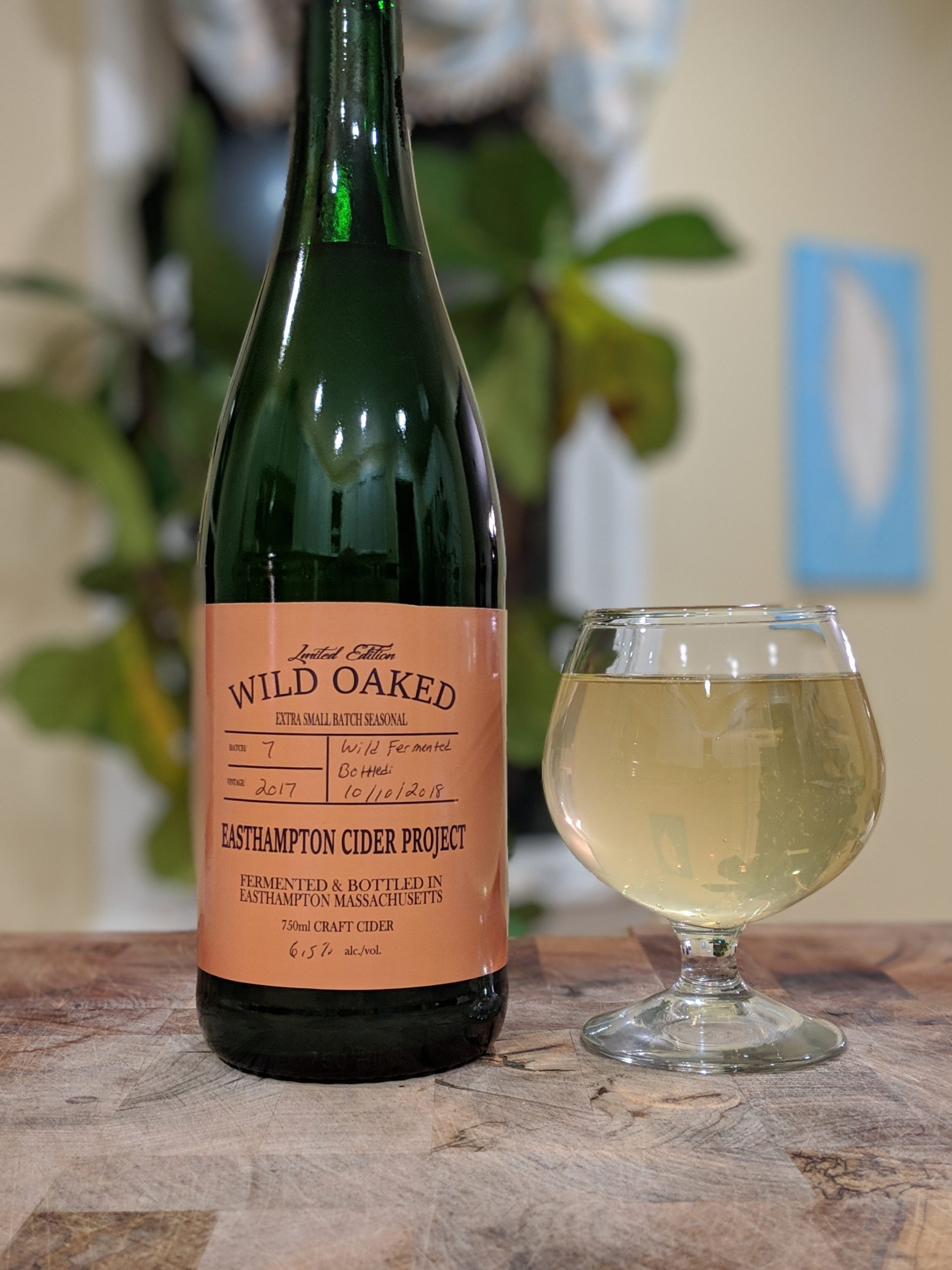 “Wild Oaked” is a wild fermented hard cider that is crafted in the style of many Spanish ciders. It is dry with notes of the fruit coming through at the finish. The flavor is slightly “earthy” with an interesting depth of character and mouthfeel which is derived from the wild yeast strains in the cider and aging with French Oak that adds tannins and complexity to the mouthfeel. If you are used to drinking a “New World” style cider which is characterized by brands such as Angry Orchard, Original Sin, or Woodchuck this cider may seem a bit “tart” or “sour”. The reason for this is that there are many different yeast strains involved in the making of this cider and the residual sugar is very low. In contrast, new world ciders typically kill any potential wild yeast strains in the cider prior to fermentation and introduce one commercially raised yeast strain to ferment out the juice. In addition to this, a brand like Angry Orchard typically back-sweetens their cider quite substantially after the fermentation process is complete. This process leads to a large amount of residual sugar masking the flavor of the apples in the finished cider.

“Wild Oaked” cider pairs well with foods like steak, potatoes, blue cheese or sharp cheddar and crackers. If you are interested in trying an authentic farmhouse cider, the way they were created 100 years ago with a complex flavor, no additives, no preservatives, no filtering and almost no residual sugar “Wild Oaked” is for you.

Notes On The Batch Process

Orchard: This is a very small, 5 gallon batch of cider that I crafted from a mix of “Winesap” apples and “Arkansas Black” apples. Both varieties of apples are an old world heritage apple with their origins dating back to the 1600’s in England and the mid 1800s in the USA respectively. Both varieties are considered ideal for making hard cider. The Winesap adds the sugar content and acidity while the Arkansas black helps balance the blend with tannins for mouthfeel and a lower acidity sweetness. I obtained the apples from Bashista Orchard in Southampton, MA where they have a limited number of Winesap and Arkansas Black trees on their property. The blend is mixed approximately 80% Winesap and 20% Arkansas black and it was interesting for me to see what kind of flavor I could get with just those two varieties.

Wild fermentation is a style of making cider where the cider maker controls the environment in which the cider ferments, but the fermentation itself is really very random, relying on the wild yeast strains and microbes that naturally reside on the apple’s skin to create the complex flavors, aromas, and other characteristics of the cider. Each batch can truly be different from one to the next, even if all of the variables of the juice are held constant. This is because of the randomness of relying on certain wild yeast strains which compete to eat the sugar in the juice. There is also the variability of certain natural yeast strains residing in one particular while another orchard miles away could be a host to very different yeast strains. Due to this uncontrollable variability there is a certain degree of inherent risk involved in this style of cider making. A batch could come out amazing and complex or it could potentially be ruined by the wrong yeast strain taking over. However, it is this variability and potential for interesting flavors that really brings enjoyment to cider connoisseurs weather they are making a cider in this fashion or drinking it.

The apples for this particular batch are vintage fall 2017. They were pressed and fermented throughout the winter of 2017/2018 and aged for a brief period of time on French oak wood. The cider was then bottled September of 2018 and then aged for another 6 months before being released. There is a slight carbonation to this batch which is just enough to open up the cider and release the aromas while not being overpowering and “fizzy”. This cider was not treated with any preservatives and is a living cider. Like a fine wine, It will change with age and will most likely improve with cellar aging for another 2-3 years (if you can wait that long!). I really enjoy this cider and hope you will too.