The Making of a Colonial Cider Part 1

THE MAKING OF A COLONIAL CIDER PART 1 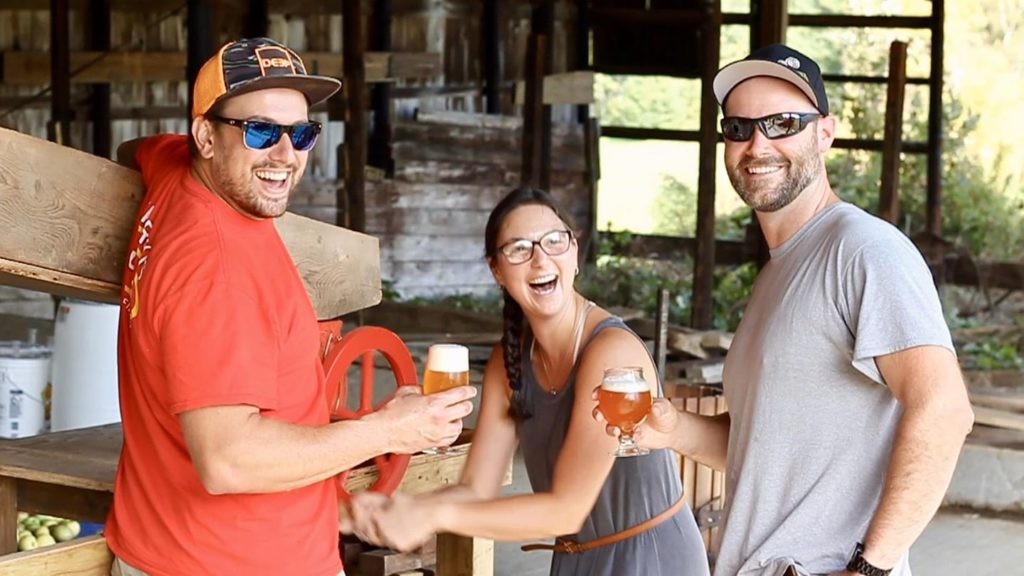 In the fall of 2019, my good friend Gordon Meadows and I set out on a collaborative project with the goal of making a cider that would resemble as closely as possible a colonial cider made in Western Massachusetts 200 years ago. Gordon, who is the owner of Field and Forage Productions, had just purchased a piece of land in Shelburne MA that he named the Meadow Forge Farm. It is a 4 acre tract of land with a three-sided pole barn sitting on the front of a meadow in an ideal New England setting. This pole barn would be our site for storing our apples, crushing our apples, fermenting, and aging our cider. In order to stay as true as possible to the methods of the 1700 and 1800’s we decided to forage for our own apples (instead of buying dessert apples from local orchards), crush the apples using a hand-powered grinder, press the apples using a basket press, naturally ferment the juice using the natural yeast on the skins of the apples, and finally ferment and age the cider in oak barrels that we would store in the barn.

On an early morning in mid-September, we hopped in the pick-up truck in Northampton and started driving west into the hill towns of western MA. Fueled by Shellburne Falls coffee and breakfast sandwiches, we cruised the back roads looking for signs of wild apple trees hanging out of the forest. We spotted a tree tucked into the woods next to a stream and we popped the truck in reverse until we backtracked to where we had seen it. We grabbed our tarp out of the truck and set it up on the ground under the tree. Then both of us grabbed the tree and started shaking the tree hard enough to make all of the ripe apples start falling onto the ground all around us and into the tarp we had laid out. After a good shaking, we picked up the rest of the apples that didn’t make it into the tarp and unloaded the tarp full of apples into the back of the pick-up to go find another tree. We repeated this tree shaking exercise 5 or 6 more times that day before we had a full pick-up truck full of apples that needed to be dropped at the barn to sweat for a week or two before pressing.

From September through November, we repeatedly foraged almost every weekend collecting more apples and pressing them into juice to be fermented. At one point we had a nice little mountain of foraged apples in the barn just waiting to be ground and pressed up. The grinder we had was a hand-cranked grinder with a weighted cast iron flywheel to assist in the cranking motion. We couldn’t find a vintage hand crank so I bought this one new from Pleasant Hill Grain for a couple hundred dollars. While it definitely did not have the efficiency of a modern electric grinder, it did the job we needed. Gordon constructed a giant grinding table out of 2’x4’s and plywood that served as our base and a stand for our buckets that were catching the pomace as it fell from the grinder. He also built a giant hopper that would feed the hand crank so that a single person could grind a bucket or two worth of pomace before needing to reload the hopper.

The barn did not have any running water or heat which added to the rustic charm. However, it did have electricity hooked up, so we strung up 5 or 6 100W light bulbs to allow us to work into the night. We were lucky to have a lot of friends and family who were interested enough in the project to come out and help us pretty much every weekend. Gordon’s cousin, Noah, who is the head brewer at Berkshire Brewing Company, was also a big part of the project and helped forage and press on many weekends and weeknights after work. He hooked us up with the use of his facility to wash our oak barrels before we used them for fermenting the cider. On any given weekend you could drive up to the Meadow Forge Farm and there would be a crew of us sharing brews and ciders as the sun went down while we pressed up the week’s haul of foraged apples.

The lack of running water was a bit of a challenge that we had to overcome. We devised a system where we would haul up two 30 gallon trash barrels full of clean water from Northampton where Gordon lives. Then we would separate some of the water into 5 gallon pails that we kept in the barn and add sanitizing solution to half of those buckets. That way, we could sanitize any equipment or buckets that needed to be sanitized and still have a few “clean” buckets of water to use as needed. Then we would load up the apples from the floor of the barn or barrels where they were being stored, into bushel baskets and carry them up to the first barrel of water which would be our pre-wash. After soaking the apples in the pre-wash we would strain them out and transfer them over to the secondary wash to soak for a time. Finally, we would unload the clean apples from the secondary wash and put them into the hopper above the grinder. One person would grind the apples into the pomace while another person would press the pomace in the ancient basket press. When we had filled up a sanitized plastic bucket with juice, we would cap it, put an airlock on it, and let it sit to ferment away in its own natural yeast. We were well aware that using the plastic pails might have been cheating, but we didn’t have the wood barrels yet and the plastic was what we had on hand. Hey, you have to use what you’ve got!

The apple press was a vintage cast iron and wood basket press that Gordon found on craigslist. He got an amazing deal for it and we brought it back to the barn and gave it a new life. There was something about using the old press which was actually a delight. Everyone wanted to take a turn using it! As you would walk around it cranking down the screw, it felt as though you were being transported back in time. Honestly, after a hard day’s work at your day job, there is no better way to kill stress than to smash apples with a hand cranked grinder and squeeze juice with an antique cast iron beast of an apple press!

By the end of November the nights were getting colder and the lack of heat in the barn was really becoming an obstacle. It would be dipping down below freezing at night and then warming up slightly during the day. Pressing apples in the freezing dark was becoming a major pain and the apples we had left to press were becoming really mushy. Luckily, we got our oak barrels just in time from a supplier up in Maine. They were barrels previously used for aging bourbon and now we were going to use them for aging our cider over the winter. We took the barrels down to BBC brewery where Noah helped us sparge them out. The thought behind the sparging was to make sure the barrels were fresh enough to actually hold water before we put the hard earned cider into them. The secondary idea behind the sparging was to use water hot enough to kill any possible bacteria that might have been in the barrels that could taint the cider. We sparged the barrels at 200F for about 20 minutes and then drained them out. They held water great so we were ready to load them with fermenting cider!

The cold nights had mostly frozen the cider that we already had fermenting in the plastic pails. We had to move the pails out into the sun and luckily it was warm enough that day that they began to melt enough for us to transfer the cider from the pails into the oak barrels. The freezing cider is something that colonial cider makers would deal with regularly. They would often press their cider in the fall, put it into barrels, and stick the barrels in their barns. Here, the cider would freeze over solid during the winter and in the spring when the temperatures started to rise again the cider would thaw and begin to ferment again. This freezing and melting process would go on like this until the weather warmed up enough for the barrel to permanently thaw and finish fermenting out to dryness. We are counting on the same thing happening to our cider as well in the three sided unheated barn. We will age the cider in these barrels all winter and spring until we bottle them and condition them for another year in the bottles. They will be ready to drink in the fall of 2021 when we plan to open them up to share with friends and family.

As of writing this, it is mid-January 2020. There is over 100 gallons of frozen cider sitting in a barn up in Shelburne in the middle of a field. These 100 gallons of cider represent hundreds of man hours of labor, hundreds of hours of hanging out with friends taking part in a shared interest, and hundreds of hours of good times to come, where we will be sharing the outcome of this experiment with our friends and family. From most professional cider makers’ viewpoints, what we are doing would be crazy to attempt for commercial purposes. Foraging for apples, the lack of efficiency using hand powered tools, the lack of sulfites or other preservatives to kill wild yeast, the lack of climate control, and barrel aging in the open elements all lend a great degree of inefficiency and unpredictability. There is a reason why cider makers today don’t use the exact same methods as the cider makers did 200 years ago, but it’s for those same reasons that this experiment is so interesting to us. Regardless of the final results, it’s the process and the story that is what sets this cider apart and what makes this cider more interesting than any other cider in Western Massachusetts at this moment. We can’t wait to share it with you!

I will provide an update on the aging process and the bottling process with a preview taste test once we have the cider bottled! Keep an eye out for updates!